We are over halfway through the Magic of Solstice Fantasy Writer’s Blog Tour. No fear, though, we still have plenty of interesting authors to showcase. In fact, today’s guest, Louise Findlay, writes poetry. She’s provided a lovely poem complete with illustration for her post today. Please welcome Louise and enjoy getting to know her.

Louise Findlay writes fantasy (generally short stories) and inspirational poetry. She enjoys reading and writing about mythological creatures such as angels and demons but has a soft spot for vampires. Louise is currently in the midst of writing a vampire novella about two vampire clans whose deputy’s clash in a big way, entitled A Spy in the Sagax Vampires.

She generally writes ebooks but she’s a part of a few anthologies which are in print and plans to release a print version of a collection of poetry at Christmas time this year. 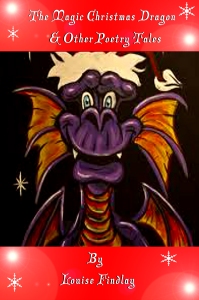 There was a dragon that hated Christmas because Santa never gave him any presents. Every year he tries to ruin it for everyone in Wintaru. Read the tales about fairies, elves and goblins who try and thwart this dastardly dragon.

Join us on the Dreamless Roads where we step across the threshold into the unknown to discover words that have turned into worlds of imagination, legend and, of course, fantasy. Commune with your inner elf, or dwarf, quest with heroes and warriors, and cross the borders into the land of gods and dragons ~ and the past and future realms of possibility and adventure.

Available at Barnes & Noble and Amazon

Heroes with an edge are always fascinating and when the métier is poetic, the romance tends to rise exponentially because, after all, everyone loves a rascal who’s only a heartbeat away from being on the wrong side of the tracks, but who somehow always battles on to win the day, whether that’s fleeing from dastardly henchmen, or fighting a terrifying dragon.

“Certain parts of the poem flowed B-E-A-U-T-I-F-U-L-L-Y where the commas were utilized to perfection” Review quote by Mr. Controversy at The Review Board

The Fey Save the Day

The dragon that lived in Winta Cave, had another Christmas to rue.

The fey planned to save the day but did he know that too?

With their magic they had a plan, it was quite cunning too.

They snuck behind him in his cave, careful to avoid him.

With bated breath, they wait to strike, oh how they abhorred him.

Fast asleep, it was time, time to destroy him.

Oh how the fey adored, heroes of a whim.

“Sprash na dah” the spell cast, ready to kill him.

The dragon awoke and started to sneeze, he was allergic to them.

“Oh no, we’d better retreat” for the fey were small in number.

“Oh yes, flee now” they skedaddled on out of there.

The dragon then thought to stop, not such a great idea?

“Next Christmas” he thought.

He’d sneezed and fought, it was time to sleep now.