KJ Hawkins joins us today to tell us about herself and her writing. Her first published work is out in an anthology. Please enjoy getting to know KJ and enjoy the excerpt she was kind enough to share with us.

Bio: KJ Hawkins is a young fantasy author making her way into print. She has had a strong love for fantasy since she was nine years old.

As an adult the magic stayed with her inspiring her to write stories of adventure and magic. Hawkins, at her best, brings personality to every word she writes, exciting her readers with every page.

Fun Fact:  KJ Hawkins is actually a pen name taken from the initials of her real first and last name. Hawkins came from her favorite childhood film, Treasure Planet, the lead character is James Hawkins!

The Magical Muse: A Collection of Fantasy Stories 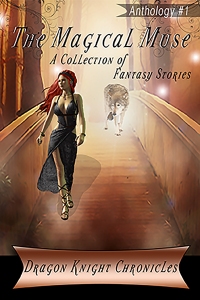 Trisha finds herself in the clutches of a monster like know other. She has to fight her way to freedom only to find herself looking at death’s door. Will she survive the fight or will a secret hidden from her past be her saving grace?

Stories of fantasy ranging from dark, to light and inspiring, bring life to this anthology.  The creatures featured throughout, both good and evil, display the devastating or wonderful personalities they were given by the authors who created them for your enjoyment.

Available at Amazon and Smashwords

The train’s wheels screeched as the brakes were thrown up and the storage car came closer to the camp. Trisha could barely stand in the rail car as the mass of bodies standing around her slammed into her. After such a long voyage, the smell in the car was intense from sweating bodies, urine, and other bodily fluids.

If someone had told her three days ago that this was going to happen to her, she wouldn’t have believed them. Just thinking about how those soldiers had broken down the living room door while Gram brushed her black hair was frightening enough. Then to find herself separated from the only family she knew, and thrown among these other women and children who were considered useless, was nerve-racking.

Trisha didn’t even want to turn her thoughts to what could possibly be happening to Gram right now. Her health wasn’t the best and she could barely make it around on her good days. She knew the only reason Gram still was alive was because Trisha needed her to survive in this world of war.

Her mind was racing with so much dread and worry Trisha hadn’t even noticed that the train had slid into a stop. She had pretty sharp hearing for a kid; at least that was what her Gram had always told her. Trisha could slowly hear the yells of men outside the sliding doors. Her heart started to race faster as the doors to the car began to screech open…

A large muscular man appeared in the center of the door frame. He stood with a frown on his face and his arms crossed over his chest. His golden hair was shining in the sunlight. What really frightened Trisha to the core were his eyes.

The eyes that bore into her soul weren’t human, at least from what she could see. They were smoldering red holes that made her feel like she was in the presence of death.

“Welcome…Jewish scum,” he spat. “This is Ravensbruck—the place to throw you worthless women and children. I am Sergeant Smith, and if you are lucky, you might make it out alive.”

Sergeant Smith locked eyes with Trisha as she began to tremble under his devilish gaze. He smiled, showing his razor-sharp teeth, and she knew in that moment that she was going to die there.